Break The Rules if Dharma is Upheld !!!

Narada had the power to travel through space and time. One day, he decided to pay a visit to Ayodhya , the city of the rule-following Ram and to Vrindavan, the village of the rule-breaking Krishna. At Ayodhya, he told the story of Krishna; the residents did not appreciate the rakish, mischievous cowherd at all.
He is not serious at all, they said. At Vrindavan, he told the story of Ram; the residents did not appreciate the upright and rather serious king at all. He is no fun, they said. Narada then went to Hanuman, the mighty monkey, and asked him who he preferred : Ram or Krishna? And Hanuman said, "What is the difference? Both are Vishnu to me; Lakshmi follows him, whether he is Ram or Krishna."

So what is the difference between Ram and Krishna? Both belong to two different contexts: Ram lives in Treta yuga and Krishna in Dvapara yuga. One context demands Vishnu to be the upright rule-following Ram and the other context demands Vishnu to be the lovable rule-breaking Krishna. Both are same, but different. Both are upholding social order, dharma; one by keeping the rules and the other by breaking them!

In corporations, we seek people who comply and frown upon people who do not. But people love breaking rules. Often being in a senior position is an excuse to break rules. Being in the creative profession is seen as a chance to be undisciplined. But being Ram or Krishna is not about whether rules are upheld or broken; it is about the reason why rules are upheld or broken. Few pay attention to that.

Ankita is the chief operating officer of a large design studio. She has a staff of designers , colourists, architects and painters. It annoys her a great deal that they never come to office on time, never keep deadlines , never stick to timelines, and plan things only when compelled to. How can she run the company like this? The staff argued , they are all creative artists who cannot function with rigid rules. It hampers their innovative spirit.

One day, the following month, salaries did not reach people on time. Ankita took a vacation that day and was not reachable on phone. When she returned to office on the following Monday, after a long weekend, she saw an angry mob of employees demanding an explanation . "Surely , I have the right to be creative too and not keep deadlines and commitments," she said. The staff was not amused, but the message was passed loud and clear. It was a risk Ankita took and it paid off.

We all want to be Krishnas and want others to be like Ram, without really understanding what it means to be either. To be Ram or Krishna, we have to be Vishnu and to be Vishnu, we have to ensure there is social order that brings Lakshmi our way.
( By Sh.  Devdutt Pattanaik in Economic Times /23 March 12)
Posted by Yesh at 17:03 No comments:

Use of Death Fear for Betterment of Life.

Longback , during a train journey, I met a person who told me that he was a devoted Anandmargi. For those who are unaware of Anand Marg Sect , I would like to tell that Anandmarg originated in Indian state of West Bengal in 1955. And very soon this sect became very well known across India because of their one strange practice. The followers of this sect would make a procession on road in full public view , while each follower wore a human skull in his neck like a garland. Later on that practice was stopped because of public hue and cry and Government intervention.
So, when I was told by my fellow passenger that he followed Anandmarg, I asked him about the philosophy behind wearing a human skull. His reply had an excellent piece of wisdom. He said  that  DEATH IS THE ONLY CERTAINTY IN THIS WORLD BUT HUMAN BEINGS ARE PROGRAMMED IN SUCH A WAY THAT ALL HUMAN BEINGS CONSIDER THEMSELVES IMMORTAL UNLESS A DOCTOR GIVES A TIMEFRAME OF DEATH.
This , according to him, was primary reason behind Aasakti आसक्ति or attachment to the world and consequent corruption of various nature. He further told me, that by wearing a human skull, the follower is constantly reminded of mortal nature of human life and therefore preventing him from committing a bad deed as sooner or later everybody has to reduce to a human skull , seeing which nobody can decided if it was a President or begger's skull.
I agreed with him but I asked whether they still wore it. He told me it was not compulsory and if you can reach that Anaasakti ( detachment) अनासक्ति without  a skull , there is no need to wear it.
The fear of death can bring such positive changes in human life. And one really good contemporary example is of Steve Jobs , the founder of APPLE. Six year before his death in 2011, Jobs had talked about how a sense of his mortality was a major driver behind his vision of iphone. He was suffering the cancers of pancreas and liver and doctors had predicted a very short life for him. 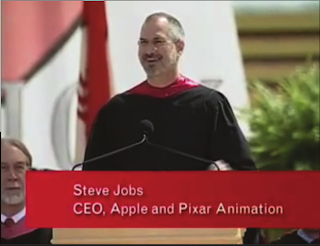 “Remembering that I’ll be dead soon is the most important tool I’ve ever encountered to help me make the big choices in life,” Jobs said during a Stanford commencement ceremony in 2005.
“Remembering that you are going to die is the best way I know to avoid the trap of thinking you have something to lose. You are already naked. There is no reason not to follow your heart.”
Imagine if  our octogenarian  rulers start wearing  a skull , India would be a different country.....